What are eating problems?

Eating problems can lead to eating disorders. These are illnesses (disorders) that make somebody eat too much or too little or exercise too much every day, for a long period of time. Lots of us might eat a little more one day and a little less the next. That’s perfectly normal. People with eating disorders do this day after day, and they can’t stop even though it’s making them sick. No one knows for sure what causes them but what is known is that people don’t choose to have eating disorders. Eating problems can start because of different reasons, like going through a stressful or traumatic event. They can be serious but most people with eating disorders can get better.

It’s usually very difficult for people with eating disorders to get better on their own, so it’s important that you find professional help and support as soon as possible. The sooner someone is treated for an eating disorder, the better their chance of making a full recovery. Eating disorders can be very dangerous – but remember that Childline will provide the support you need to get better.

The most common eating disorders are Anorexia, Bulimia or Binge eating. Some people may suffer from both Anorexia and Bulimia together.  It is important to seek treatment early for eating disorders. Complete recovery is possible. Treatment is available at both in and out-patient facilities.

Treatment plans for eating disorders include

A combination of these approaches is sometimes better. Typical treatment goals include restoring adequate nutrition, bringing weight to a healthy level, reducing excessive exercise, and stopping binge-purge and binge-eating behaviours. It is very important for the person receiving treatment to have family support during and after treatment.

People with Anorexia (an illness which makes people stop eating food) have a fear of weight gain and they see their body as very much bigger than it really is. As a result, they eat very little and can become very thin. Many teens with anorexia limit their food by dieting, fasting, or excessive exercise. Sometimes they hardly eat at all and worry all the time that what they do eat is going to make them fat. Other people with anorexia eat food and then try to get rid of it by making themselves vomit, take laxatives to make their stomachs run, take diet pills, or else they exercise over the limit of what is healthy.

Anorexia could help you feel in control of things, especially if other parts of your life are getting stressful. Like if you’re experiencing bullying or having a bad time at home or in relationships. Anorexia can also get out of control and start to feel like it’s taking over your life.

Anorexia can be very dangerous. Eventually people can die if they don’t eat. It’s very important for you to get help if you’re eating less and losing a lot of weight. Proper nutrition is important for growth, having strong bones and general health. It also gives you energy to think, study, work and do physical things. 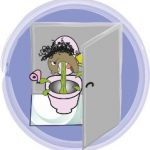 Bulimia is an eating disorder that makes people want to eat a lot of food at once and then try to get rid of the food from their body, by vomiting, using laxatives, enemas or doing lots of exercise.  Over time this can be dangerous for their health and can lead to behaviours that are hard to stop

Bulimia is a mental health disorder which often makes people feel like they don’t have control over eating. The disorder is characterized by binging and purging. And often the more people with bulimia binge eat, the more they want to purge. It can be a cycle. Many people who have bulimia have low self-esteem or don’t think they’re good enough. Some people think they need to be thinner to fit in. If life is full of pressure and stress, bulimia can feel like a way of coping.

Bulimia could start because of a mixture of different problems, for example:

Bulimia can feel like too much to deal with. But you can get better. And we can help you, call Childline for support.

It is important to talk to someone if you have Bulimia. Trying to cover up what’s going on could make you feel alone. Talking can make recovering from bulimia feel a little easier.

Binge eating also known as compulsive overeating is an eating disorder which makes people feel that they must eat a LOT of food in one go. Binge eating can start to happen because of feelings that are difficult to cope with, but you can get better and Childline can help you.

Binge eating can cause:

Helping someone with an Eating Disorder

It can feel challenging to help someone with an Eating Problem as they sometimes get secretive they might shut you out but you can still help them.